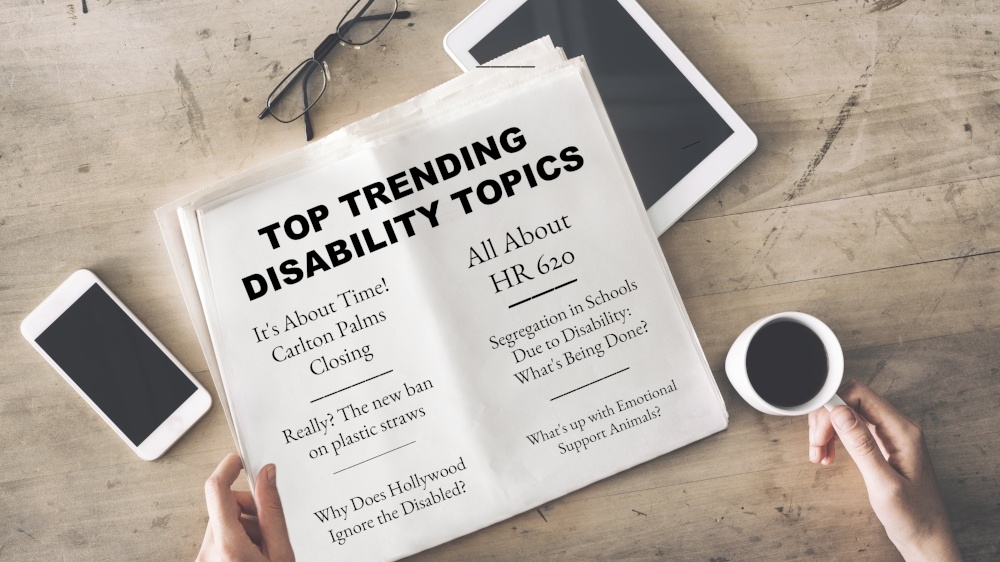 What's the talk around town? What's trending on Twitter? Let's face it, news about the rights of the disabled is usually not making front page news. It's unfortunate, but it's reality. So, in an effort to keep people informed and to help them make a difference, we're rounding up today’s current hot topics into one convenient post.

For a moment, it looked as if the country was taking a step backwards. H.R. 620 was poised to weaken the Americans with Disabilities Act (ADA) by removing incentives for voluntary compliance with ADA laws and extending the timelines for making appropriate accommodations for those in non-compliance. The thought was that the bill would reduce frivolous lawsuits against public places not accommodating those with disabilities. However, the notion that there are thousands of disabled people just looking for lawsuits in order to make a quick buck was quickly debunked, as the only money that can be collected in these cases are attorney's fees; no one is getting rich off an ADA-inspired lawsuit. Thankfully, the bill seems to have permanently stalled after 43 Democratic Senators pledged to filibuster the measure.

Segregation of Students with Disabilities

The National Council on Disability presented a comprehensive report to President Trump regarding what they felt was a violation of the Individuals with Disabilities Education Act (IDEA). The report states that despite the progress IDEA has made, students with disabilities, in particular students of color in urban settings, as well as students with specific disability labels (such as autism or intellectual disability), continue to be removed from general education and are segregated disproportionately when compared to white students who live in suburban and rural areas and those who have less intensive academic support needs. The reports states that, “the greatest disservice we do to students with disabilities is to view them as one homogeneous group...labeling a group of children and lumping them into one bucket and one classroom does them a disservice. All inclusion, all the time, everywhere, every day—does the same thing. It doesn’t recognize the fact that students need services uniquely designed to meet their particular needs.” As of this publication, the Trump administration has pushed aside an IDEA measure that would require states to flag school districts with high rates of placing students with disabilities from particular racial or ethnic groups in restrictive settings.

While ESAs (otherwise known as comfort or therapy animals) are frequently used as part of a medical treatment program and can run the gamut of species, they are not considered service animals as defined by the ADA. However, this hasn’t stopped people with an ESA from treating them as federally registered service animals. This has caused a lot of confusion, especially when it comes to housing, public spaces, and especially air travel (an ESA hamster, pig, and peacock have been the topic of numerous stories regarding flight policies). For pets to be considered an ESA, a letter from a licensed mental health professional is required, and an emotional disability must be diagnosed; regardless, this does not make the ESA federally registered the same as a guide dog would be. With no real regulations in place, for now it seems understanding on the part of the public and common sense on the part of the ESA owner is necessary for everyone to “just get along.”

While great strides have been made in the representation of women, people of color, and LGBT individuals in television and film, people with disabilities are rarely seen. According to the U.S. Census Bureau, nearly 40 million Americans have a disability, representing almost 13% of the population. So when disabled individuals make up just 2.5% of characters in 2017’s top 100 films, there seems to be a big disparity. “Good intentions are not enough to create change,” says Stacy L. Smith, founding director of the Annenberg Inclusion Initiative. “Hollywood needs tangible, actionable solutions that will usher in real transformation.”

While it’s not closed just yet, Carlton Palms is now in receivership and is finally being shut down. The Mount Dora, Florida facility, often referred to as “the house of horrors,” has a long history of caregiver abuse, two incidents of which led to death with the most recent fatality happening in 2018. While Florida law now treats assault against disabled people as a first-class felony that can carry up to a 30-year sentence, with failure to report suspected abuse considered a third-degree felony punishable by up to 5-years in prison, we must all remain vigilant. The disabled aren’t always able to explain abuse, and breaks and bruising can be written off as falls. Non-physical abuse is also not uncommon, with 90% of abuse victims reporting that they were verbally or emotionally harmed. Knowing the signs of abuse is the best way to protect our loved ones.

Major companies and entire cities have announced that they will be banning plastic straws in an effort to go green. The move is not without merit; studies reveal that the United States alone uses about 500 million plastic straws per year, littering streets and landfills. But while the move is certainly eco-friendly, it’s not so friendly for disabled individuals who rely on a plastic straw just to take a drink. Alternatives to the plastic straw have been proposed, such as paper, biodegradable plastics, or reusable straws made of metal or silicone; unfortunately, none of these are a good substitute for those suffering from cerebral palsy, multiple sclerosis, muscular dystrophy, loss of limbs, or a host of other disabilities. Is a compromise possible? If laws are to be enacted banning plastic straws, disability advocates suggest laws also be implemented requiring restaurants to keep a stock of them to hand out upon request. The debate continues with no resolution as of this publication.

As advocates for the disabled, Disability Experts of Florida will continue to fight for rights and equal treatment. You can file grievances and make your voice heard by contacting the complaint department of the ADA, and our team of professionals is always here for you as well. Be sure to subscribe to our blog for the latest news and updates on stories like these.