Arthritis and Disability: Do You Qualify? 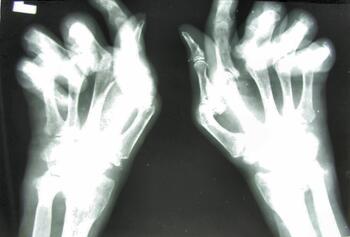 If you suffer from arthritis, you know of its disabling effects on the human body. From osteoarthritis to rheumatoid arthritis (RA), all of the effects are painful. Did you know that there are over 100 forms of arthritis recognized by medical professionals? Perhaps you didn’t know that it is the most common disability in the United States and that more people are on disability insurance because of arthritis than any other disability. That’s an alarming statistic. If your arthritis has hampered your ability to work (or stopped you from working entirely), it might be a comforting thought to know that you can, in fact, qualify for SSDI benefits.

The Difference Between RA and Osteoarthritis

In case you’re not familiar with the differences, there are a great many. The reason why there are over 100 forms of arthritis is that there are a variety of causes. For instance, osteoarthritis is the most common form of arthritis. When most people complain of arthritis pain, swelling in their joints, and so forth, they’re most likely complaining about osteoarthritis, which is caused by wear and tear on the joints. This is common among  older people but everyone can be affected by it, so you should be wary of this condition. This is the harder form of arthritis to justify claiming disability insurance on because it is very common, yet it is rarely so disabling as to put someone out of work.

The other major form of arthritis is that of RA. While the symptoms of RA are fundamentally the same (the inflammation of joints that cause pain, swelling, and redness), the reason why it exists is far different. Osteoarthritis is caused primarily by wear and tear on the joints, whereas RA is primarily an autoimmune disease. If you have RA, your body is attacking itself and destroying its own joints. This is why the severity is usually much worse with RA; your body isn’t attempting to fight the degeneration of your joints, it’s actively causing it. It’s far easier to justify a claim for RA, but again, both types (and the cases in between) can all be used to justify a claim.

Is it Always a Disabling Disease?

Arthritis is not always disabling. Some have more pain than others, and some have more joint restriction than others due to the form of the disease and the progression of it. There are medications and surgeries that can be done as well to either prevent the worsening or slow the progression of the disease. However, the Social Security Administration (SSA) has written guidelines as to how it classifies what is a disabling form of arthritis.

The SSA’s Blue Book lists in detail what it is to be disabled. It states that the disorder that they recognize for instant qualification for disability is deformed joints with chronic pain, stiffness, and limited movement (including abnormal movement). It requires that at least one major weight-bearing joint is affected by arthritis so much that it limits your movement or one major joint on your upper body on each side that results in the limited movement.

If you suffer from this kind of pain and limited mobility, you may qualify for disability benefits and should speak to a professional about applying for SSDI. Just because this is a naturally occurring medical condition doesn’t mean that you shouldn’t get the care that you need in order to have the ability to take care of yourself. Don’t let arthritis drag you down, and don’t let anything get in the way of your future. It’s painful and you might feel embarrassed sometimes, but you shouldn’t. Your future is still ahead of you.